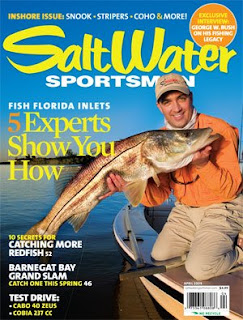 Check out the April 2009 Saltwater Sportsman- Inshore Issue, There is a featured article on Maine Striper Fishing on the flats of lower-western Casco Bay
Pages 34-39

Fish for stripers the unconventional way — on the flats of Casco Bay.
April 14, 2009
By John Frazier (More of the article at (saltwatersportsman.com)

Stealth
As any flats-fishing junkie knows, a stealthy boat is a successful boat. Striper fishing in Maine is no different, and that goes for everything from poling to presentation. The water temperature averages about 60 to 65 degrees, which is perfect to keep fish happy and active. When we encountered the big fish on the sand, Wallace instructed me to put a sock in it — I was so excited to see those big fish in only a foot of water, I was rambling like a child. Such skinny water also means you need to pay special attention to your baits. When fly-fishing, long leaders (up to 12 feet) are in order, as are unweighted flies. Spinning tackle calls for the same — light leaders with either live crabs or soft-plastic jerk baits to minimize the splashdown and increase your odds. When you make your presentation, try to lead fish as much as possible, and make your cast in front of and beyond the fish. When you think you are leading the fish too far, lead it a couple more feet. The fish are less likely to spook if the drift of your offering has a more natural appearance and time to get down to the fish's eye level.

I'll Be Back
I'll never forget the first time I ever threw a fly at a tarpon — my knees were wobbling something fierce. That was a long time ago, and I never thought I'd be able to recreate that sensation until I found myself on the deck with four 30-pound-plus stripers lazily cruising by in 2 feet of water. Just like that first tarpon, these fish didn't eat, either. But they left me with a void that I'll need to fill. And the only way to do that is to return to the shallow flats of Casco Bay, Maine.


WHAT: While stripers are the main draw, fishing for laid-up bluefish is another scenario anglers might witness on the flats of Casco Bay. Throwing poppers to these voracious feeders when they are stationary is a blast and quite different from fishing for them when they are schooling.

WHERE: Although there are several airports that are in close proximity to Casco Bay, the most convenient is Portland. Rent a car at the airport and head north to Freeport, which is a great spot for couples. Bed-and-breakfast type inns are aplenty and are well suited for anglers and shoppers alike.

Don't forget to Save the Date June 4 for Fly Fishing Film Fest in Portland.This is the perfect way to start off the Maine Striper Fishing Season. Some Great raffle Items are coming in, from High end rods to Guide trips and endless swag!!
at March 25, 2009 No comments: 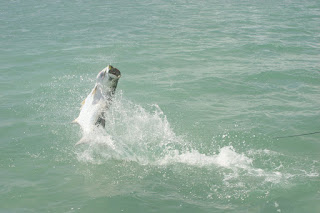 The weather is just getting better every day here in the Lower Keys. Sunshine and lighter winds are starting to prevail which means the tarpon should start moving on the flats a little better in the coming days. Last week was tough with high winds and some cloud cover but we managed to get a few fish to the boat and jump a couple others.

Bonefishing is phenominal right now. The bonefish range from 5- to 8- pounds in our back yard on Sugarloaf Key. They are a great fighting fish and are a lot of fun if you just want to take a break from the mighty tarpon.

There are still some permit on the flats but they are smaller right now because the majority of permit are still offshore on the wrecks and rock piles spawning. There are some bigger permit around but few and far between.

I still have some available dates around July 4 weekend for tarpon, bonefish and permit. July is a perfect time to target the slam. August and September are also great months for relaxed fishing as the boating pressure diminishes greatly by then.

I'm in the FL Keys until Late April then it's off to Cape Cod, There is a few days left open between the 15-30 of May for fishing the Cape. As for Maine here is what is open as of today thru July 4, Will update April 1st, The best bet is to Call for bookings 207-671-4330 and I will return your call as soon as I'm of the water.


Remember June 4th for the Fly Fishing film tour in Portland Maine,Hosted by Flies and fins.
More Info Soon, PS fishing in the keys has been real good.

Observe one of nature’s fascinating spring rituals. Witness thousands of cinder worms as they wiggle their way to the surface performing their spring mating dance. Quietly wade the protected coves of Ninigret Pond on a warm spring evening. See the beauty of a sunset over tranquil water. Now listen to the sound of silence as it is interrupted by dozens of surface feeding stripers. Finally, fish for those stripers using the tiny cinder worm flies you tied yourself. This isn’t some kind of fisherman’s dream? It’s reality and it can happen to you.

The U. S. Fish and Wildlife Service in partnership with RI D.E.M. is organizing a Cinder Worm Workshop. There will be two weekday evening classes in fly tying instruction on cinder worm patterns and one weekend evening of fly fishing. We would like to have everyone attend both workshops, but you also have the option to pick just one.

Fly Fishing - Ninigret Refuge (entrance through Ninigret Park) on May 30 begins at 4:00 pm and we will fish the worm swarm till dark. Introduction to practical rigging and casting instruction will be covered for those that need additional assistance. Fly Fishers will then fish the coves of Grassy Point area of Ninigret Refuge. (We don’t guarantee the weather or the fish but past experiences have shown that this is prime time for the worm mating season.)

This program is open to any adult or child over the age of 15 regardless of skill level. Instruction and guidance will be provided by some of the area’s most knowledgeable worm fishermen. All fly tying materials will be provided. We encourage the use of personal equipment, but RIDEM Division of Fish and Wildlife’s Aquatic Resource Education program will also provide the necessary fishing and fly tying equipment (other than waders)) for beginners and entry level registrants. Pre-registration is required.