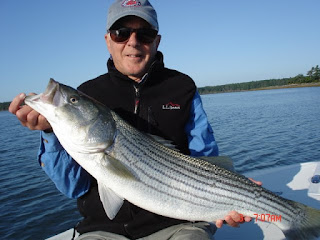 Is it post heat wave or pre storm or Just better tides? I'm betting all three but would place my favorite crab pattern on the tides, if I was a betting man. What ever the reason the fish have been much more snappy the last few trips for us, after a period where our water hit 74 degrees and it just seemed that every fish would just follow, for the beach anglers or folks throwing off a lower casting deck it would seem the fish had moved out deep but, Guiding from and poling platform and having a casting platform on my flats skiff we where seeing things that drove us nuts, changing flies, fishing 12 ft 8 lb leaders to 35 inch fish- on and on- just follows then we hit on area that we found some fish that where snappy and would eat anything we threw at them much more fun for my anglers. Then came better tides and the fish have been a little easier every where fish the last few days but still a very short A.M window, and looking forward the weather will cool and with the big tides 11 plus ft the next few days we will get the water cooled a bit as well. There is tons of bait hanging near the shore line flats and the outer island sand flats have sand eels all over them, Fish early and get your fly to any swirl quickly and for you guys that have not figured it out yet??? stealth is key!!!!! you can not run you motor all over the flats in Casco Bay or any where right now, and expect to catch fish these fish are so well feed the last thing they need to do is eat our artificials, pole use a trolling motor or drift but if other anglers are up on the mud or sand flats give them tons of space and turn your !@#*ing motors off!!!!
at August 21, 2009 No comments: 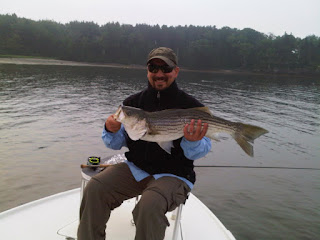 First off sorry for missing last weeks report, we had some outstanding fishing on the flats then a worm hatch turned on late this week, that kept me going full on .There are tons of nice fish hanging around Maine's waters and reports of big fish taken on Live bait, plugs and fly are reported daily. Night fisherman have scored reel big this last week as we flats guys have had a ton of large fish roaming the sand flats on the incoming tide it's just finding the right fish to eat your fly in the sun, something new here in Maine this summer of fog and rain - weather is been perfect the last few days and with the nice weather and southerly flow to the winds the fishing been much better, Tuna are showing off Portland and bluefish moved into Saco and Casco Bay, helping crew up some of the bait and hopefully make the stripers act a little more predator then just lazy feeders they have been with so much food in the system. The beach anglers are still having a tough go, But the boat anglers are finding ways to feed the fish witch we have plenty, just they have tons of food so if you are fishing flies bring your A game the rewards are out there.
at August 10, 2009 3 comments: 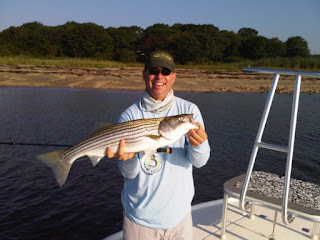 Tim Yomans picking up an nice fish off the sand flats today Aug 1 the fish ate the fly in less than 2 ft of water, good job Tim!!


Also Check out the Trailer for this January 2010 ESPN 2 Flats fishing show.
http://www.youtube.com/watch?v=FVVA9yT07G0

Overall it's been a good week,the weather was not too bad and we even had some sun to do my favorite thing, (sight fish) add to the mix, the quality of fly anglers I had this week- we got some nice fish in the shallows to move on the fly, in the 11 o'clock sun, One angler has been a back country guide in the FL keys for 25 plus years and what a joy to fish an angler with his skill set from casting 15 ft leaders with crab patterns to putting a hollow fly down in front of a high and happy big bass with out spooking it- to result in an eat!! I just had a blast the last few days!!!! Today was clear again and had some nice fish with dark backs ripping over the sand flats on the outer island beaches,

The morning Incomings have had some good feeds on Juvenile Herring and the fish have been pretty friendly to our flies, Hollows, Poppers, Juvie Herring fished tandem and Pollack patters have been good for us until we move to sight fishing, where crab pattern on floating lines and long leaders have worked well with the right anglers also white flats deceivers- hollows,


People often ask what spots do you like in Casco Bay? my answer- I fish tides not spots-Casco Bay is a tide chasers dream the fish eat and layup in different spots on each tide, not as easy to learn like fishing the beach and rocks or a big river system like the kennebec, Casco Bay, has a ton of flats and mussle bars you can fish skinny water all tide if you move at the right time to the right place, The tides have been key!!!! Many anglers go back to the same spot two days later different stage of the tide and are convince the fish have left, No they have not there is tons of fish and bait all over Casco Bay the tides have been key!!!! water temp is great the stable weather has turned on the fish. They are boat,leader and fly shy, change up a little- fish 10-12 pond floroand don't get stuck in your old ways if there not working otherwise these fish will drive you crazy with follows,

Maine Fishing Reports from the Kennebec have been good and the Tuna reports near Portland are looking up as well.


The web boards have been full of negative Maine Striper Reports- I had sent an e-mail to one angler hoping for him to hit it again instead of posting a doomsday report From www.flyfishinginmaine.com here is his fourum posting.

With some renewed confidence, courtesy of Capt. Eric Wallace -- I had the best Striper outing this morning in 2+ years, easy. I must have seen a hundred fish on this one particular flat...multiple pods of 25-30 slot-sized fish, and larger. Surface activity -- lots of feeding....just plain fun. Caught fish from 22" - 30" -- largest came on a gurgler! I also lost several on gurglers that broke off, and was worried that there were blues in the mix, but I didn't land any. The biggest Striper was fresh and mean, and had me WAY into my backing on an old Battenkill reel with a loose drag. Get out there and have at it -- turns out there are fish around -- they have just been hiding from me.
at August 01, 2009 1 comment: