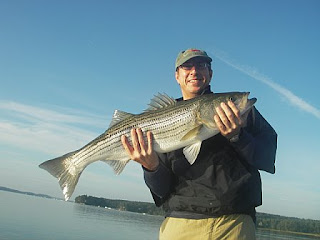 
The stripers have been schooling up here in Maine for the past few weeks, and now the feed south has started!!! we are seeing days ranging from close to 35 fish in 4 hrs to working our but off for a few eats. The one thing that has not changed there is tons of bait around, and lots of fish to feed on them, there are area that are holding micros as far as the eye can see, everywhere little 15-19 inch bass, They have shown us some early blitzes as well!!! Great to see this throughout Casco Bay, also reports that the Kennebec is fishing pretty well and that good news for us, as those fish will be coming through Casco Bay soon. The story for us this week was a 41 inch out of less then 3 feet of water sigh casting over a sand flat, I'm working on posting the photo after I do some Photoshop work to kill the landmarks. The bait is holding in the grass so the lower parts of the tide have been key higher tides have fish pretty slow and the last few days of NE winds suck!!!! the tides will change around and thing should light up again real soon pray for some warm south winds.


This weekend is the Royal River Striper Tournament Sept 12 and 13 -2009, this is the first year in 18 that it's a catch and release tournament so get out and show your support and there is some good money to be won for the the fly angler. My next report will include a rod review of the 2010 Scott s4s Sage Xi3 and Winston MX2 all three have been brought on my boat over the last few weeks and some have stayed with us to play with, we have the same line on all three, there is some good stuff out there, save your nickels These rods really have improved over the last three years Good stuff.
at September 11, 2009 No comments: