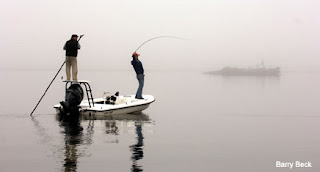 The 2009 Atlantic striped stock assessment update indicates that the resource remains in good condition with female spawning stock biomass (SSB) percent of the SSB target and 185 percent of the SSB threshold (see Figure 1). Estimated fishing mortality rates (F) in 2008 are equal to or less than 0.21 and below the target (0.30) and threshold (0.34) rates. The assessment provides stock status for the combination of the three primary stocks (Hudson River, Delaware River, and Chesapeake and tributaries). The striped bass stock complex is determined to be not overfished with overfishing not occurring.

Although spawning stock and total biomass have remained relatively stable over the last several years, stock abundance declined from 2004 to 2007 with a small increase in 2008. The decrease in abundance is reflected in a decline in coastwide landings in 2007 and 2008. The decline is more prevalent in areas largely dependent on contributions from the Chesapeake stocks (such as Maine) than areas that are dominated by the Hudson stock (such as New York). The spawning stock has remained relatively stable due to the growth and maturation of the 2003 year class and the accumulation of spawning biomass from year classes prior to 1996. The latest results of the statistical catch-at-age model also exhibit an increasing retrospective bias where F is overestimated and abundance and biomass underestimated. Retrospective bias may be the result of error in catch estimates, natural mortality, unequal stock mixing, and changes in catchability or selectivity. Analysis of tag data also suggests an increasing natural mortality in Chesapeake Bay, likely the result of the mycobacteriosis.

Recruitment estimates have averaged 12.5 million fish since 1995 when the stock complex was declared restored. The 2006 and 2007 estimates were the lowest in recent years at 7.4 million and 5.8 million fish, respectively. The 2003 cohort remains the largest since 1982 at 22.8 million fish. Recruitment in 2008 of 13.3 million fish was slightly above the recent average.

Striped bass are one of the most sought after species by recreational anglers along the Atlantic coast. In 2008, recreational anglers landed over 2.2 million striped bass weighing 12,310 metric tons (mt) (see Figure 2). Recreational landings have ranged from a low of 336 mt in 1989 to a high of 13,814 mt in 2006. The coastwide landings in 2008 reflect a 17 percent decline from a high of 2.7 million fish in 2006. Changes in landings have varied by state, with MA, CT, and NY showing an increase in landings and the remaining states showing a 32% decrease on average. Recreational discard mortalities (assuming an 8 percent mortality of releases) in 2008 were 950,000 fish, a 64 percent decrease from a high of 2.1 million fish in 2006.

Landings from the commercial striped bass fishery have been consistently lower than the recreational catch. Commercial landings increased from 63 mt in 1987 to 2,679 mt in 1997 and have remained steady due to quota restrictions. Landings in 2008 were 3,281 mt. Gill nets are the dominant commercial gear used to target striped bass. Other commercial fishing gears include hook and line, pound nets, seines, and trawls.

Copies of the stock assessment update will be available via the Commission’s website at www.asmfc.org under Breaking News. For more information, please contact Nichola Meserve, Fishery Management Plan Coordinator at (202) 289-6400 or nmeserve@asmfc.org.
at November 10, 2009 No comments: