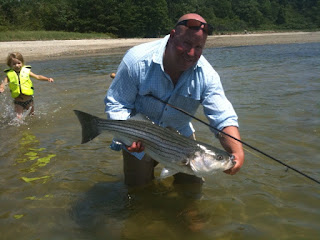 The fish are really starting to spread out, and some are moving into there summer patterns, while others are still heading to the rivers for the bigger bait. There is lots of Blue Back Herring in the rivers now and the Juvi Herring and sand eels are making for some fun surface feeds around the bay if you hit it right!!!! timing has been key most of the week we have been meeting at the dock by 345-4 am the first light bite has been Best then the low incoming has been good. Thursday it just seemed as the fish just took the day off for us? goofy winds and big tides Fri was much much better. Post trip on Friday my wife and kids met me at the dock for a trip out to the beaches on the outer islands (See Photo above), I personally have not been able to fish much with my guide schedule, so when your wife says lets go and you have incoming tide, I was stoked to say the least!!!I was looking forward to trying out some crab patterns I have been working on and was hoping for some shots on the sand flats. The fish above was caught mid day in the bright sun on an olive EP fiber striper merkin a 12 ft leader and floating line my favorite setup for this style of fishing, I'm glad the crab has become more popular with anglers in the NE but it seems many have a hard time fishing it from a boat they just want to cast at every fish they see and strip away, for the most part that just spooks them while some of the beach anglers are doing well with bigger crab patterns fished real slow!!! hoping the fish comes to it. What we have been doing is a little more permit style and I'm lucky to have so many customer who also fish permit and Bonefish what we look for is a small group of fish on the sand that have seperated from the bigger 10 plus fish groups you spook one you may shut down your flat but 2-4 fish moving along they are not being so social with the others and are not playing follow the leader,often these are the one's we can get to eat, We are placing a small crab near that small group they will twitch and spook a little bit but as soon as they see a small crab droping one or more will come back, read the eat from there and good luck!! Being able to fish sand flats this way when you have the right tides and sun angles really makes Casco Bay such a cool fishery!!!!!There's only a hand full of polling skiffs in the bay that can really take advantage of fishing the sand flats the right way here in Maine so please remember guys and I see all the time a center counsel pulls in on the flat two anglers start pounding the water then then they start there motors up and leave without coming tight, just to screw up the flat for the walk wade anglers and the few skiffs guys that have spent the time dialing this style of fishing in Not Cool!!!! and Keep those trolling motor at slow speed on the sand they really do spook fish!!! PS start having wire with you those toothy guys are starting to show in the 6-8 lb size!!!

Some of the afterwork crew at the dock, where saying they had some slow fishing on Friday afternoon fishing near the flats on the incoming, Guys the mud was exposed to air temps up 85 and bright sun, hell yes the mud flats are going to be slow with those temps,even on a strong incoming tide.

Rumors have it the kennebec is holding up and fishing well into the mid day give it a try there are some guides up there with some open dates that can show you some great water befor the catch and kill season starts up there in July. 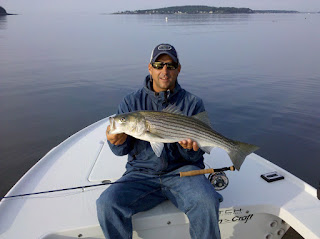 Fish the tides!!!! It's been a first light or low incoming all week, this morning we changed it up from plugging away on the flats on the outgoing and it worked!!! we found some real bright fresh fish on the outer islands then we moved onto a big mud flat for the incoming and found fish waking and working the flat for a few hours and we where done around 11am with fish still showing. My angler today was Capt Robert Walczak from www.tarpontails.com it was the first time I met Rob who was up visiting his son at Camp Sunshine, I have herd a lot about his skills and his Tournament wins prove his guiding skills, Winning Guide FL keys Red Bone -Back-country Classic the list go on. If you are fishing out of Naples area look him up.


More Soon!!! I have only had few days off in the last three weeks and really need to spend some time at the tying bench,looking forward to the new skiff to show in the next 10 days, Suzki motor shortage put it behind about a month. 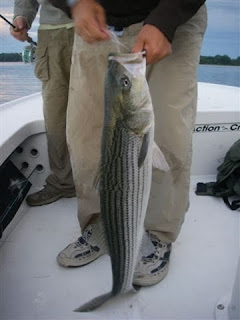 Bouncy weather and some soft tides slowed it down for a couple of days, but it's back on!!! the last few Mornings thing are kicking back into gear at full speed, there are tons of good reports coast wide!!!! Also with a swell in the water for a few days I was able to get a few standup paddle surf sessions in, post guide trips and areas just east of Casco Bay had a ton of fish on the surface in bright sun not and angler insight.so I would think the Kennebec crew will be in for some real hot fishing the next few days aswell. Fly wise 5-7 inch hollow purple was the fly of the day the last few mornings for us, there is a ton of Blue Back Herring in Casco Bay and with the rain and wind they are still out of the rivers in big schools, there is plenty in the rivers but the water quality is taking it's time from the weekends rains, the steeper tides that are setting in should speed that up over the next few days and we should be in for a good weekend of fishing, Fish the low sun angles and the tides (slack high has been slow!! 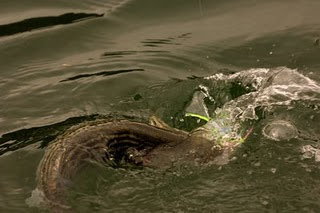 Bait wise have it all Small Juvi, Spike Mac. Adult herring sand eels and lot of Green crabs floating around to play with on the flats during slack high a slow strip might find an eat. Size wise the there still good groups of small fish but I would say most fish to the boat are in the 24-29 range with a few lower 30 mixed in. The aces fishing the rocks and beaches South of Portland report a few near 40 on the fly the last few days good job guys!!!! we still have not broke the 37 inch fish we got during the heat wave on a crab pattern but we are having a ton of fun working on it....

Hey Check out www.flyfishjeff.blogspot.com for some S Maine updates 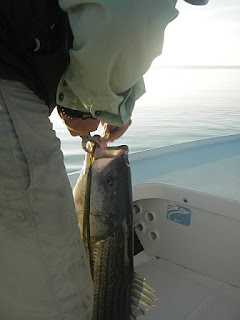 Since last Wednesday it's been darn good.  A nice body of fish moved into Casco Bay and they are up on the flats in some pretty shallow stuff.  And we're encountering on a regular bases some groups well over the slot range.  And they are taking poppers, hollows and even got a fish just over 32 on a crab pattern this weekend, without-a-doubt one my favorite way to fish -- sun, incoming tide and feeding nice size Stripe Bass a crab pattern, and wait it's only late May- early June ??? are we not suppose to be fishing big pattern in the rivers??


The local rivers are loaded with bait and where busy with boats this weekend and the reports at the docks are good the guys I see out often are all smiles!!! they have it dialed and are just stoked on the quality of the fishing we are having so early in the season, But guys lets have a little etiquette out there!!! I had a few boats jump us on the flats!! it put down the fish, that’s fine I can move quickly and find other fish. But for the shore anglers they work hard to find a spots and can not get to good water quickly and it's just f@#kin rude to pressure shore angler if you are in a boat!!!!

The reports to the south are very good and many saying the best they have seen in years, we should keep seeing new fish showing and with stable weather outstanding fish. But not always easy the fish have a ton of food and as we saw with the big winds on Sunday afternoon they are still getting tweaked by water temps we had a 3-4 degree drop around the bay and had to work harder for the eats on Monday and today but every flat we went to we spooked laid up fish, Stealth is always good in skinny water.

I got a call from a friend from the Keys Jon Ain, I fish Permit with him often and have learned a ton, why wouldn't I, he has won the Del brown and the March Merkin and is in the top 5 permit anglers in the world with 304 caught on the fly, with so many toury wins I will give him another, the smallest fish of the week, sorry Jon 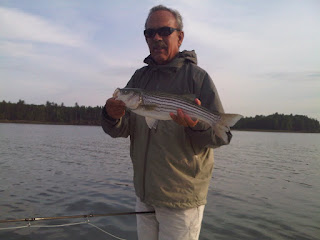