Striper fishing in Maine
A stunning visual journey, DRIFT combines the highest quality film production, world class flyfishing and an eclectic group of anglers to create the most definitive film about the sport to date
.
Please Drop us an E-mail if your interest in joining us for a Movie Night featuring Drift and other shorts, we are putting togeather the final dates and venues. This film-fest is for anglers by anglers we a looking to raise money for some local striper fishing issues here in Maine
Capt Eric Wallace 207-671-4330
at October 22, 2008 No comments: 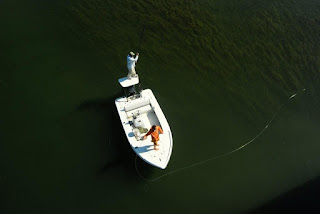 One of the few area's that held fish in the summers of 2007 and 2008 was Casco Bay. Like all of Maine, was loaded with big bait , difference was we had fish to cast too. In 2008 you could count on two hands the number of fish that came to the boat under 20 inches, the story was learning how to feed bigger fish that where using the warmer flats to digest after having an all night feed on adult menhaden. A stealthy approach and longer leaders became as important as the tide and lower sun angles
I'm not going to talk about flies as these are the bread and butter and some secrets must be kept by the guy on the poling platform. My self and Capt John Ford spent hours working out some patterns that we feel changed our season!! as the bait anglers sent us photos of the there big fish we where able to respond with 35-40 inch fly caught photos of our anglers, I'm not going to kid you, It was work to find fish that would eat on a daily bases, but they where there, not to often showing them- selves unless you found them first.

(The photos are from a story I did with John frazer of Flyfishing in Saltwater and Saltwater Sportsman on skinny water striper fishing, due out in March 2009 it's a feature story and I'll let John tell how the fishing was for him on two bright sunny days on Casco Bay) 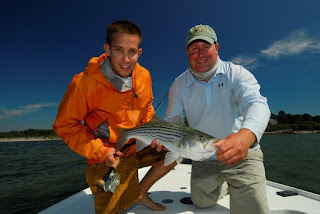