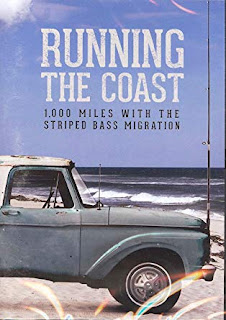 Popular posts from this blog

September 08, 2008
Brad Burns - Stripers Forever
Maine, U.S.A
The battle of the striped bass is on, and Brad Burns, President of Stripers Forever, is on the frontlines, fighting to protect the fish so many of us pursue.

In the last five years, anglers have seen the population of spawning-age stripers fall by nearly 20%. Spurred by a massive increase in commercial harvest quotas and alarmed by the plummeting numbers of big fish, Brad and other concerned anglers banded together to form Stripers Forever in 2003. Since then, they’ve spent nearly every waking hour working to stop the unsustainable harvest of striped bass along the Eastern Seaboard.

June 24, 2018
June 23 -2018Portland area -Casco Bay  Fishing ReportWelcome Summer to Maine!!!! if the past week or so  of available  nice size fish on the flats is a inducator of the direction this season is going, -I’m stoked!!!The  returning schoolies as a whole have a bit more size  then the last couple of season as expected, what's really is nice is the large amount of 30 plus inch fish on the flats- that are more than willing to eat flies or soft plastics, this is just fun good fishing we are having!!! There is a lot of bait around the bay and the bass have spread out  past just being near the major  river systems, fishing the tide is key, both incomer and dropping are fishing well----    Sight Fishing has been very solid and when tide and sun match up it's just outstanding  !!!!  We boated  the fish in the above photo  at high noon in less than 2 ft of water,   get in touch if you are needing more info or looking to get out and enjoy some very good fishing…..  Capt Eric Wallace - Coa…
Post a Comment
Read more