Things are starting to move along in southern Maine,, area’s in Casco Bay are holding fish, but the best fishing in Maine this past week was on the Piscataqua where reports of 25-30 inch stripers surface feeding on the small juvi herring, On the sunny days I've done 4 trips on the sand flats, yes sight fishing in May in Maine ? lovin it !!! a week ago we where seeing lot's of fish on the incoming tides on the sand flats, Casco Bay had reports of a few fish caught, now the sand flats are showing fewer fish but we did get some shots at a few very large bass in the skinny on saturday, mean while anglers in Casco Bay are starting to picking up more fish, some nice fish in the Saco also the shad fishing has been hot at times!! Looking forward I'm hoping for a big push of fish in the next few days we have the bait and the water temps.
at May 31, 2009 4 comments: 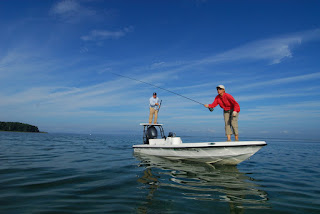 Stripers are Here
Many of you have asked me to drop a line when something good is happening on the water, well here it is. Yes, Cape Cod and Rhode Island are fishing well, but the real story is the Merrimack River to the estuaries near Portland, Maine! After a few scouting runs, I was willing to fish one of my repeat anglers and after what we experienced he's coming back for more the first week of June. Give me a call if you want to get out there, (207) 671-4330.

We started on an incoming tide but the fish were on the move and even with a quick cast and a good angle they just ripped past. No leans or love on the incoming. After the tide turned it got bright around 11am and we saw some pushes along the banks and in the deeper channels. I poled up-current in about 3 feet of water on a sandy bottom so my angler could cast into the deeper channels. Then we started to see fish right under us on the sand flat in the sun in Maine in May! I was in heaven! We worked on these fish about and hour or so, bringing in some nice ones. There’s something special about this after what we’ve seen the last two years----keep um coming!

The Fly Fishing Film Tour
This national festival is playing in Portland, Maine at the Asylum on Thursday, June 4, at 7pm. Hosted by Flies and Fins and sponsored by The Drake magazine, Sage Fly Rods, Patagonia, Scientific Anglers and others, The Fly Fishing Film Tour showcases some of the best cutting edge fly fishing films to date. There will be a pre- and post-show party with appetizers, beer from local brewing companies and outstanding shorts from 406 Productions, World Angling and Flies and Fins, to midnight. 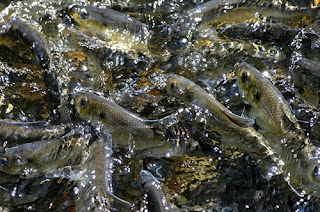 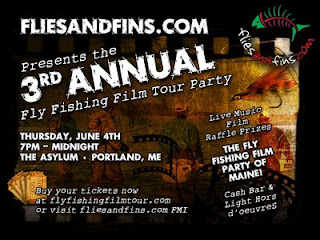 A perfect way to start off the 2009 Striper fly Fishing Season in Maine.

Rhode Island and Cape Cod are turning on!!!! some great reports and some not so, it seems the guy's in the know have been finding the warmer water and have had some active days. Looking ahead if water warms the Late May worm hatches could be fun we all know how silly the bass get over these sworms,Maine's water temp's are not to far off from the cape's we are ahead in temp they are behind so let's hope the fish move through the bait and move up in better number than last year.

The Fly Fishing Film Tour, Hosted by, www.fliesandfins.com sponsored by The Drake magazine, Sage Fly Rods, Scientific Anglers, Patagonia, among others, is touring the country this spring and early summer, showcasing some of the most cutting edge fly fishing films to date. The festival is playing in Portland, Maine at the Asylum on Thursday, June 4, at 7pm. There will also be a pre- and post-show party with appetizers, beer from local brewing companies and some outstanding shorts from 406 Productions, World Angling and Flies and Fins, 7pm to midnight.

Tickets for the festival are $15 for adults (21 and over only). For more info on the Fly Fishing Film Tour, and to see trailers of the films that will be showing, check out the website: www.flyfishingfilmtour.com or contact Eric Wallace by email, eric@coastalflyangler.com, or phone, 207-671-4330.

"The focus of this tour is to showcase the talent of these filmmakers, raise some money for various conservation groups and provide fly-fishers an evening of entertainment," says organizer Tom Bie. "It may also be the only legitimate chance for thousands of lonely fly-tyers to actually get a date."

. "Drift" -- Sweeps across the flats of Belize and the Bahamas to spey
casting on Oregon's Deschutes River and exotic rivers in Kashmir, India.
10-minute and 18-minute segments.

. "Bass: The Movie" By Jamie Howard-- Pits a fly-rod angler versus a
conventional angler in a bass hotspot. Who will win? 5 minutes.

. "Rivers of a Lost Coast" -- Led by fly-fishing gypsy Bill Schaadt, a cult
of California coastal fly-fishermen revolutionized their sport and redefined
their lives. 5 minutes.

. "Drum" -- Filmmakers take you inside the mind of the Holeman Brothers and
their relentless quest for big redfish in the character-filled community of
Hopedale, La. 9 minutes.

. "Raising the Ghost" -- Finding steelhead in a remote stretch of British
Columbia is hard enough. But finding ones that will chase a dead-drifted dry
fly? Nearly impossible. 5 minutes.

Fly Fishing Film Tour Summary
When: 7 p.m. June 4th., doors open a half-hour before the show.
Where: Asylum, 121 Center St Portland ME Cost: $15, 21+
Length: 90 minutes plus shorts and live music
Prizes: Among the many door prizes is entry in a grand prize drawing for a trip to Belize, Fly Rods and Patagonia gear.
Tickets/More Info: Go to www.flyfishingfilmtour.com or follow the buzz at www.fliesandfins.com
at May 05, 2009 No comments: