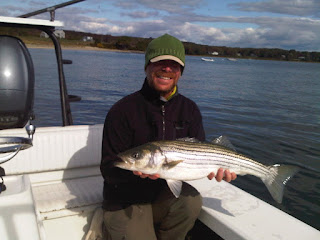 Maine Striper fishing reports
Poling a shoreline flat on the outer islands of Casco Bay Maine and looking for a dark back to run up on the sand and hoping the sun stays out of the clouds long enough to get a shot, is something I look forward to in say Late June - August?? but sight fishing to stripes in the low sun angles of Oct in Maine come-on this is cool!!!! With a lack of little fish showing the last few years, and few and far in-between blitzes on the outgoing tides, we really started working the incoming tides and taking shots at the bigger fish we see on the sand, this has become standard way for us to fish, along with chasing waking fish on the mud flats, So quite chasing birds and start working the flats the fish are still around!!!!!!!!! On the Kennebec there has been reports of some good surface action between Richmond and Bath, the lower river should produce good for another week or so. Give one of the local guides up there a call, October can be some great fishing here in Maine and so far this is holding true once again.

On the beaches there are some reports from the guys at Eldrige Bro fly shop in Cape Nedic of some very good fishing there as well, the beach guys around OOB are still struggling??? Tuna bite with the on and off weather seems to be holding the light tackle boats from the chase. Overall the reports I've got from the boats guys for the season have been much better than last year with high hopes for a real good season early on with good catches reported in late may and early June than the rain just kept coming killing the Kennebec and the Saco area, Casco Bay held it's own but you had to search for clean water then you found plenty of fish, and for the most part you had the place to yourself!!!! On the beaches my friends who fish crab patterns and have been for years and do it well had a good season, but others had a tough year, Lets hope the Atlantic States Marine Fisheries Commission can get there shit together and manage this fishery!!!! because the lack of small fish in the system is very worrisome, these jokers are actually voting on rolling over the uncaught commercial harvest from the year past this is a shame and total BS, many of you live in Mass call write or what you can!! and ask them to manage this fishery, not just bend over for the commercial guys.
at October 06, 2009 1 comment: