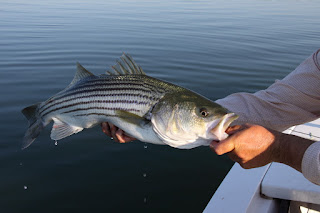 A hand full of boats fishing Casco Bay in the Yarmouth area had a little early season success this past weekend, weather wise if you are traveling to the region in the next week be hopefull that the patterns changes soon, just unstable crap!! Water temp, things are in good shape lots of small bait around and reports of some nicer fish being caught in the Saco Bay area and we will continue to see more and more fish daily spreading out in the area.Tide wise the afternoon highs have been fishing better for us the past few days, we have few milder night coming up with a south wind and might be worth a go for a early am session but try to beat the forecasted 15- 25 mph wind now through Tuesday night.Water temps in the Royal- Portland Falmouth shoreline are around 52-54 once you get out past Cousin Island  it drops to the 48 degree range.

Give any of the small rivers a shot at incoming high tides and on the turn around, tight to the grass banks smaller flies with active materials not only have produced stripers in the 16-26 range but also a few Shad in the 19-20 inch range. Nothing gang busters yet and you will have to work to stay on the groups of fish that are around but why not get your casting arm in-shape and as we all know this time year the fishing changes daily and you can only hit it right if you are out on the water. 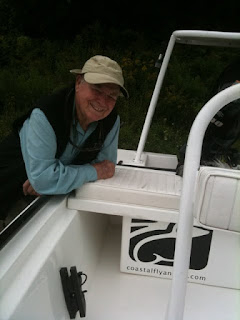 Looking ahead I have a pretty cool guest coming up, we fished a few days last year together
and he is coming back next week to fish the tidal Carp, Stripers  and we have also put together a float with a few freshwater guides, Lefty Kreh many of you or most of you have heard of this guy and what a ton of fun this 85 year old weapon of a caster is to fish with. My ears go wide open when he is on my skiff I learn a ton and have a ton of fun, hoping the weather turns around and we can get him a few shot at tailing carp or at least a taste of Casco Bay striper fishing, I have not oared much in the past ten years but in my past life as a western river trout and steelhead guide between Colorado and Oregon it made up for about 200 days a year, so will see if it's like riding a bike or not.

An effort to repeal the state's mandatory saltwater fishing registry was defeated Monday, May 23, in the Maine House.

The House voted 73-69 to kill LD 308, which sought to replace the mandatory saltwater registry with a voluntary registry in which people could register online for free. The current registry was approved last year by the Maine Legislature. The federal government was directing states to create the registry, saying it wanted the information to determine the number of people who are fishing and the impact on the resources.

State law requires annual registration, which is $1 if done online through the Maine Department of Marine Resources or $2 if done at the resident's municipal government office. People fishing for striped bass also pay an annual fee under the law approved last year.

Residents will pay $5; nonresidents will pay $15. Maine residents 70 years old or older may pay a one-time $10 fee. There will be no charge for people younger than 16 years old, disabled residents and people who are passengers on a licensed commercial vessel carrying people who are recreational fishing. All saltwater fishermen may also fish without registering if they fish on Memorial Day weekend, the Fourth of July and Labor Day weekend. People violating the law will be fined $100.

LD 308 would have replaced that system with a voluntary one in which people could register online with the state Marine Resources and Inland Fisheries and Wildlife departments at no cost. The bill would prohibit a fee to be charged.

The state Senate has not voted on the bill. The Legislature's Marine Resources Committee had recommended defeat of the repeal legislation. 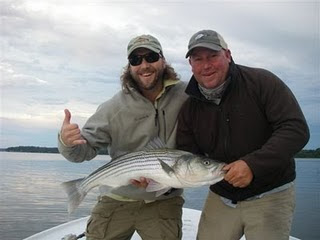 A few Stripers are now being caught here in Maine, the reports are fresh small schoolies this is good news and lets hope more of these smaller guys keep rolling in followed by the bigger fish. Some good shad fishing as well and the photos I have been seeing the shad have out sized the stripers that will change soon!!. Weather wise my windsurfing gear is getting more use then my fishing It has been blowing the past few days in the 20-30 knots range but looking ahead - Thrus is calling for light winds and temps in the 70's question chase big carp on the flats or Stripers in the rivers.....
at May 10, 2011 No comments:

Maine Striper season getting closer!!!!!!I got a great fishing report last night !! a couple of Cape Cod guides went out after hearing rumors of a good bite the day before, and by the sound of it they hit it just right!!! between them over 50 fish in 25-32 inch range mixed in a bunch of 3-5 pound Bluefish - water temps in the 53 degree range in Buzzard Bay and more fish should be heading that way daily. On this side of the Cape there have been some  bass taken in the Boston Harbor and all the way up to the Joppa flats area,  look for that to improve daily. Here in Maine the  amount of bait in the Royal River I saw yesterday while working on the Action Craft at the Yarmouth Boat Yard is any indication, Maine's waters should be pretty good shape on the food side and support some happy stripers  once the fish push up this way. Im not a betting man but I will not be surprised  to here about a bright Striper caught here on Maine's coast any day now.. 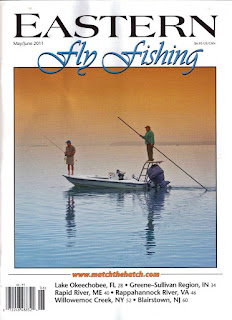 I have never really been accused of being a tree hugger, but fish hugger yes!! I have always run my guide service, witch is  now closing in on 20 years as a  catch and release experience, I also understand  there is times when the release is heading straight to the bottom for crab bait.. and this is something I think we can improve on as anglers, choosing proper hooks, timely landing of the fish, and what good is catch and release if we are not PREPARED  to take our photos  QUICKLY and release the fish..So why CCA Maine now?? I have followed this group for years was on the   board years ago and at one point just got frustrated in it's direction they seemed to be more concerned  with it's annual banquet then fishery issues, I know longer gave them my money, time or a guide trip for fund raising. Lately I have seen a new energy there, and put simply I like what I am seeing!!!  They have taken on issues and more importantly a stance that was not popular with all of there members, and I truly believe if they lost a few from those stances they deserved to get many more in return for taking the stance that would benefit the fishery at the cost of a few dollars to the users. They are also best chance of having a open line of communication with the new DMR and it's commissioner Olson, I will say this,we have our work cut out with this guy, he has NO history or by the sounds of it not much interest in recreational  angling here in Maine,the madding stance he took voting with Virginia has pissed off about every saltwater angler in Maine!! I will give him that he has only been at the job for a few months, and may not have been up to speed on the  Menhaden stocks but for what ever reasons, action like this need need to be explained to the angling community here in Maine and we need a group to open the door and ask them, consider joining CCA-Maine, I truly feel a growth spurt in a group heading in the right direction could be that voice we need while we don't have the voice that states with saltwater license have. Any anglers doing trips with me can deduct the 25.00 CCA- Maine membership from the guide fee to of set the cost....